Welcome back to the Long Lost Longbox. We continue with Black Orchid one last time as we come to and end of a Twisted Season.

So here we are at the end of another title. Well the end for this particular run anyway. So what is the legacy of Black Orchid?

I guess legacy is not the right word. A version of the character is still around in current continuity although she more resembles the original from way back when rather than her re-imagining from the 90s. The New 52 has not completely forgotten Suzy however. There is an alternate universe version that kinda-sorta resembles her. To be fair I’ve not kept up much with the new stuff so I’m going completely on hearsay and the tiny fragments that I read. Still the ideas are still there lingering on the fringes.

In retrospect this version of the character is highly regarded. The Gaiman/McKean run in particular has garnered much praise over the years and continues to be mentioned glowingly. And the Foreman/Guay 22 issue run we are finishing up here is thought of well too. The late 80s and early 90s saw many “gritty reboots” of older characters long forgotten or seemingly unusable, Black Orchid was one of the few that worked extremely well. And she was one of the flagship titles that led the launch of Vertigo. All in all the stories are compelling and still hold up.

Still, I am of the mind that the “gritty reboot” is simply not sustainable for the long run. It limits what can be done with a character and will eventually just peter out, whereas a lighter tone with touches of dark can grow in multiple directions and can lead to many new and creative ideas. It doesn’t surprise me that the New 52 has done away with a lot of the “adult” versions of characters in favor of the older more comic-booky versions. The “gritty reboot” works better, in my opinion, as a one-shot or a short run. But that is a tale for another day. And that brings us to… 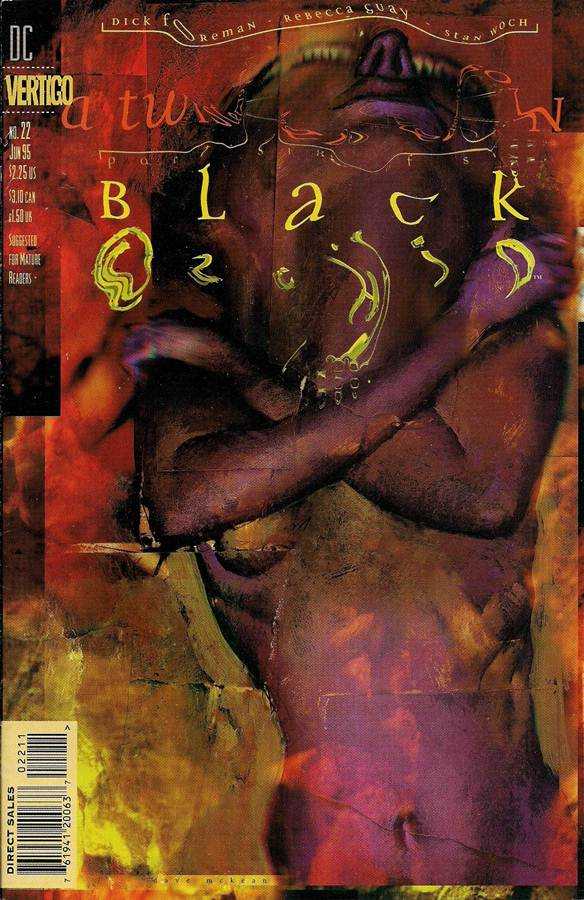 Previously on the LLL: Fiona-Orchid defeated the Kobolds, she prepares for the end.

I really like this one. A naked figure arms across her chest. Her head thrown back in anguish or passion, it is oversized, too big for the body. The canvas is torn and fragmented; the purple body sits upon an orange and yellow, fiery background. The image is haunting and beautiful.

Fiona’s mind controlled army continues to march destroying everything in in its path. At the same time Suzy grows impatient with the Horae and their prophesy of “frost” and decides to confront Fiona face to face.

At Fiona’s home/grove Suzy pleads with Fiona to remember who she was and give up her plan of killing all the humans. Fiona says that she can never forgive “despoilers” and hurls Suzy into a wall injuring her.

At that moment a masked man arrives and fires a poisoned dart into Fiona’s eye and runs. The man, who we find out is Martin Relf, is then pursued by a very angry and very injured Fiona.

Meanwhile Suzy, herself badly hurt, hears the voices of the Horae telling her to go to the greenhouse where she will find something waiting for her. It is a tree, the part of Fiona that she removed from herself, the tree of life. Suzy crawls inside it and begins to feel the power of the Black orchid grow within her as it diminishes from Fiona.

Relf leads Fiona to a trap, a steel cage with a large tank of liquid nitrogen attached to it. Fiona is frozen by the nitrogen and withers. As Fiona dies Suzy continues to grow in strength finally realizing that the Horae’s prophesy was true. Fiona died in the frost and a new Black Orchid was born.

All the loose ends were tied up. Well, the ones we cared about anyway. It was a satisfying ending but it did feel a bit rushed. Relf’s sudden appearance with the dart gun was convenient and Suzy found her way to the life tree rather quickly. And for an all-powerful being who just destroyed Earth daemons Fiona was led into a pre-prepared trap rather easily. And, if I am to be honest and why wouldn’t I be, i was really hoping for a big, epic battle between Fiona and Suzy. You know, a real struggle of strength and will and in the end it would be Suzy who would unleash the “frost” and fulfill the prophesy. Instead it was just a really weak conversation ending in a beatdown on Suzy and a random martial artist Londoner is the hero.

Now it may sound like I didn’t like this, which is wrong, I did. It just went in a direction I wasn’t expecting. To be fair the Life Tree was seeded (no pun intended) throughout several issues and Relf was mentioned several times. So it wasn’t totally out of left field. And there was some good action and tense moments at times.

Next time on an all new episode of Long Lost Longbox: Books of Faerie #1, A new title but alas only one issue.