The Foundling’s Tale: The Books of Faerie #1: Long Lost Longbox

Welcome back to the Long Lost Longbox. Today we examine The Books of Faerie, but alas only for one issue.

The Books of Faerie is a spinoff of the very successful and popular Books of Magic series (something that if you follow this blog you will be seeing much more of in upcoming weeks). It originally ran as a three issue mini-series but soon had other mini-series spring from that as well. It tells the backstory of some of the side characters from the main series and tries to fill in the gaps and add some tidbits of detail as well. But even without reading the main series this is extremely entertaining on its own.

The thing I find most entertaining about the Books of Faerie is the fact that it is just straight storytelling. Its not a “gritty reboot” or a “modern interpretation” its just a story told using the techniques and tropes of standard fairy-tales and traditional folk tales. It’s a good story. It evokes the Victorian ideal of fairy-tales in its imagery, the more Disneyesque version of things, while really keeping to the old-time faerie stories. And the authentic faerie-tales are not always such a pretty thing. Some bad stuff goes down in those old tales. Disturbing even.

And by mixing those two things – the disturbing, traditional with the sanitized, modern – while also telling a well written and compelling story we get something quite unique. Something completely new that seems like its very old. It makes me wish I were covering more of the Books of Faerie. But if wishes were horses…and that brings us to… 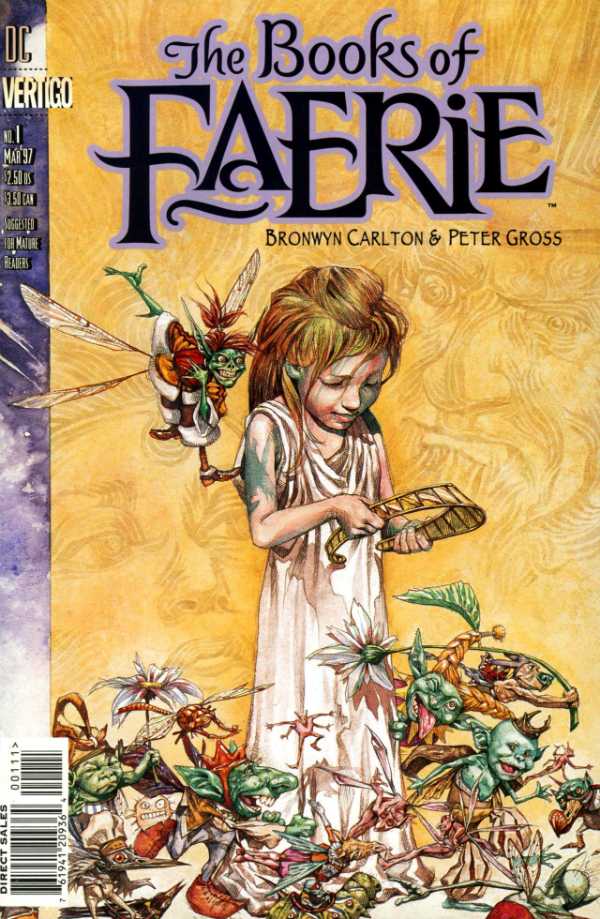 The Foundling’s Tale: The Books of Faerie #1

Previously on the LLL: We said goodbye to Black Orchid and say hello to the Faeries.

This is a really lovely image. I find it very reminiscent of the Brian Froud illustrations of fairies that he did with Henson and Terry Jones. A young girl is surrounded by various faeries all looking very playful and mischievous. The girl examines a necklace (or rather a torque) while one of the faeries in royal garb whispers in her ear. It evokes wonder and mystery and its just very nice.

After a brief introduction in present day England we are transported back to England a long time ago where a little girl named Maryrose is send out to gather kindling. She is told by her Gran to not dally and definitely NOT follow the faerie lights, which she immediately does and is taken off to the land of Faerie. She plays for a bit with some child-like faeries before being introduced to the Queen Dymphna. The Queen asks Maryrose to stay with her but tells her she is too small to be called a rose and instead names her Rosebud.

Years later, which feels like no time at all, King Obrey returns from war. Several faeries are confused, they didn’t know there was a war and Rosebud didn’t know there was a king. Dymphna explains that wars in Faerie are different than wars on Earth. Sometimes the beings of Faerie grow tired of things not changing so they go to war to make things change. Rosebud says she will never grow tired of how things are.

Rosebud is introduced to the court as if she were a true faerie and the king is smitten with her. Obrey takes her for walks in the woods and tells her how fond he is of her. Rosebud is unaware that this is anything but friendship.

At the same time a tiny flying faerie called Amadan, a bit of a trickster, has been telling Rosebud that the king has no heir and if a young girl, someone like Rosebud in fact, played their cards right they could become queen.

Later the king and queen go walking in the woods alone. Rosebud is told by Amadan that the queen has forgotten her torque, her magical necklace that focuses her power. He tells her to take it to the queen, and why not wear it while you do? Rosebud agrees.

In the woods Rosebud finds Obrey and Dymphna arguing about the lack of an heir. It becomes clear that Dymphna does not believe that Obrey is not the rightful king and should not have an heir and Obrey threatens to enchant her. Dymphna tells him he can’t so long as she wears her torque and realizes she is not wearing it. Obrey turns her into a tree.

Later at Dymphna’s memorial service several wonder if the next ceremony they see will be a wedding. Sure enough it is announced that Rosebud and Obrey will be married.

In a conversation between Adaman and the Obrey we find that they planed this whole thing so that Obrey could marry someone to produce an heir. And Adaman might (and by might I mean definitely) have ulterior motives for doing this.

Before the wedding Rosebud is told by Adaman that she needs to choose “royal” name and after much thought she announces it at the wedding as she is crowned queen. From this day forward she will be called Titania.

As you can tell from my intro above I rather liked this. The story is compelling, the art is lovely and it is just a fun read. It has many of the standard tropes of traditional fairy stories. There is the girl lost in the woods who stumbles upon the magical kingdom. She is befriended of course by the magic queen. There is the bitter old king who wants more than what he has. The withered adviser who tells lies while telling the truth. And of course the temptation that leads to either fortune or ruin. All of these details have been used before.

But this story tells them well and it weaves them into its own mythology seamlessly. The world is fully realized, we care about the characters and if you are paying attention to the main series this is a spinoff of there are plenty of “ah ha!” moments to make you smile.

This is what I loved about Vertigo from the 90s. More than the violence and cursing and sex (although there is a place for that) it is the reshaping of myth, the creation of a brand new kind of story and storytelling. This time in the guise of something old.

Sometimes you don’t have to tear down the old walls, you just have to repaint them.

Next time on an all new episode of Long Lost Longbox: Books of Magic #8, And strap in because we’ll be covering Books of Magic for a long, long time. This is a god thing.