Welcome back to the Long Lost Longbox. We continue the epic journey through the Books of Magic and meet some artful dodger types – cor, blimey!

A little background. A long time ago in a lost era called the 90s DC decided it wanted to highlight some of its magical characters. So they approached writer J. M. DeMatteis to write a prose book with illustrations from various artists. By the time this project materialized all of the artists had either moved on or declined to be involved, including J. M. DeMatteis. Undaunted DC then approached popular rising star Neil Gaiman to be the new writer. This time it would be a four issue mini-series that would be “about our magic characters.” Gaiman, who had a childhood love of magic and fantasy stories, agreed.

In order to explore the various magical areas of the DC Universe Gaiman created an everyman character, Timothy Hunter. Timothy is a normal 12 year-old boy who of course has a magical destiny. In order to make the decision to either embrace or reject that destiny he had to be given an extensive tour.

Gaiman used the four issue format to structure the journey into four distinct areas; with each issue drawn by a different artist. The issues broke down as follows:

This series proved popular and was picked up to be an ongoing series. Gaiman declined to write the ongoing and instead stayed on as a “creative consultant.” What that means we will talk about in a future post. John Ney Rieber was then brought in to write and Peter Gross as artist. Before the series proper started however there was a little thing called the “Children’s Crusade” a multi-title crossover event the included the character of Timothy Hunter and introduced several characters that would be developed in the later ongoing series. But this too is far too complicated to detail here and I will leave to a later post. Suffice to say Books of Magic started strong and gained a decent following on the back of Gaiman’s popularity. Not to mention he wrote a pretty fine story. He took what could have been a run-of-the-mill project that was basically designed to highlight and promote other properties and created something completely original. That brings us to… 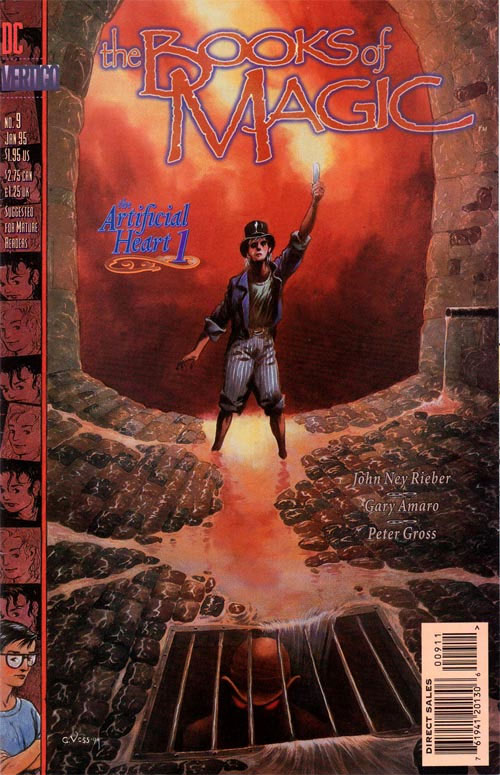 The Artificial Heart, Part I: Handmedowns of the Ragged School: The Books of Magic #9

Previously on the LLL: We met Timothy Hunter and learned of the dangers around him. Also, he’s magic.

The cover shows us an artful dodger-y type fellow in a cavernous sewer, because as we all know sewers are all massive things that are absurdly spacious. A few feet in front of him is a grate with the silhouette of a monster with red glowing eyes beneath it. Its good as far as its beautifully drawn and colored and it gives the requisite creepy vibe. I just find it a bit boring.

There is no real action or danger, its just a guy standing in a sewer. Yes, there is a scary monster in the foreground, but he’s just sort of lurking; you don’t get the impression he’s going to do anything except maybe just hide. Maybe I’m being a bit too hard on this but it just doesn’t do anything for me.

We begin in Free Country where two Dickensian waifs are fishing and having a stereotype laden conversation about girls (Cor, blimey guv’na!) when the boat they are in begins floating up a waterfall. During the argument one of the boys, Daniel, causes the other to fall to his death. A magical ‘Shimmer’ then informs Daniel that because he has killed he can no longer stay in Free Country and is to be sent back where he came from. Something Daniel obviously does not want to do.

Back in London Timothy walks to his girlfriend Molly’s house practicing how to apologize as if he were Clint Eastwood and picking a bunch of daisies from a garden. At the house Molly is initially angry but is overjoyed when Timothy says he wants to apologize because she has never met a boy who ever apologized before and tells him he can buy her ice cream. Timothy is confused but agrees.

Meanwhile Daniel is transported to modern London and is appalled by what he sees. All the old places have changed and the people he once knew all gone. The “suit people” seem to have won, he thinks and goes down to the sewers, a place where he thinks the new world could not have touched.

On the way to the ice cream parlor Molly stops at a dance studio to pick up some things she had left there. At the studio Molly meets a friend of her and asks her along to ice cream. Timothy, already worried he won’t have enough money for just two, is annoyed when another is asked along. And is even more annoyed when it turns out the friend Molly has asked along is Marya, a old acquaintance who reveals to Molly that he is a magician. Timothy runs away in frustration and anger and when he is followed by the girls freezes them with a spell he didn’t know he could do. A mysterious woman then approaches Tim from behind and asks if he knows how to “turn it all back on” again.

Meanwhile in the sewers Daniel is distraught and afraid and crys out for help. Help arrives in the form of Reverend Slaggenham, a rather sinister figure who takes Daniel to his “factory” deep in the catacombs of the sewers. There he offer Daniel work which Daniel initially refuses but is last seen running back to the Reverend to join him.

This issue depends a lot on you having read or being familiar with the Children’s Crusade crossover I mentioned above. Several characters – Daniel, Marya, Reverend Slaggenham – where first introduced there and the issue expects you to know who they are and their motivations. If you were just jumping in with this issue and didn’t know about the previous story you might be a bit confused as to who everyone is and what exactly was going on. The writing does give you a general gist of what’s happening though. Slaggenham in obviously the villain, Marya is from another place, Daniel is…conflicted, and obviously they have had dealing with one another in the past.

Regardless there is plenty to like here. I especially like how Timothy is depicted as being completely clueless in social situations. He’s earnest, he’s eager, he has all the right intentions but somehow everything just falls to crap the moment he tries to do anything. You can see how that might become tedious after a while but for now it’s charming. And there is a enough mystery in the plot to keep you guessing and wanting to read more.

If I were to find fault it is that the pacing is rather slow. This is really the era of deconstructive storytelling. Plots are stretched and drawn out. This works well in a trade and this was treated as just a chapter that is immediately followed by the next installment; if I were reading this month to month I’d be wanting just a little more action. But then I grew up on old school comics. Say what you will about Silver and Bronze age comics, you can’t deny that there was a hell of a lot going on in each issue. But the character beats from Timothy and Daniel keep you interested and the overall mystery would keep me coming back.

Next time on an all new episode of Long Lost Longbox: Books of Magic #10, Again, stay strapped in because we’ll be covering Books of Magic for a long, long time. And maybe we’ll talk about the Children’s Crusade. A good thing continues.