What You Reading? Invisible Woman #1 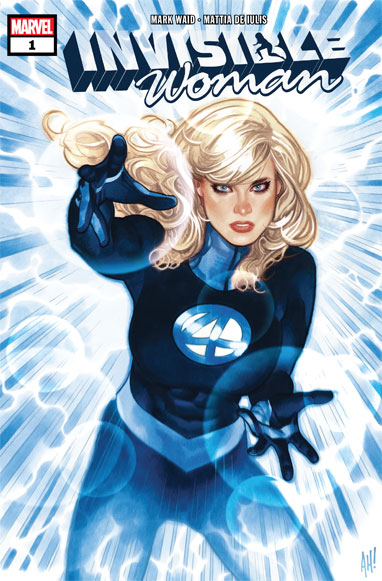 I typically do not write about first issues of a comic book because – for me – I find the first issue to be the least exciting. Nowadays a first issue is the one that does the heavy lifting in terms of setting up the premise, introducing us to the world, the antagonists and protagonists, and most importantly intruding the main character. And in the case of a well-known character – like Sue Storm – letting us know what the most recent status quo is and how this incarnation will be different.

Also, in this era of decompressed storytelling a first issue tends to be a chapter (or more likely a portion of a chapter) of a long and detailed story arc where the initial set-up will be changed and altered as events unfold. This is why, while all the set-up in a first issue is necessary, it is what I usually find to be the least entertaining.

All that being said I do feel compelled to talk about Invisible Woman #1 because well, I love Sue Storm. I’ve always had a soft spot for the character from way back to when I was reading Fantastic Four as a kid when even then I could tell that she was the most powerful member of the team. I could also tell, even back then, that she was the most under-served member of the team. 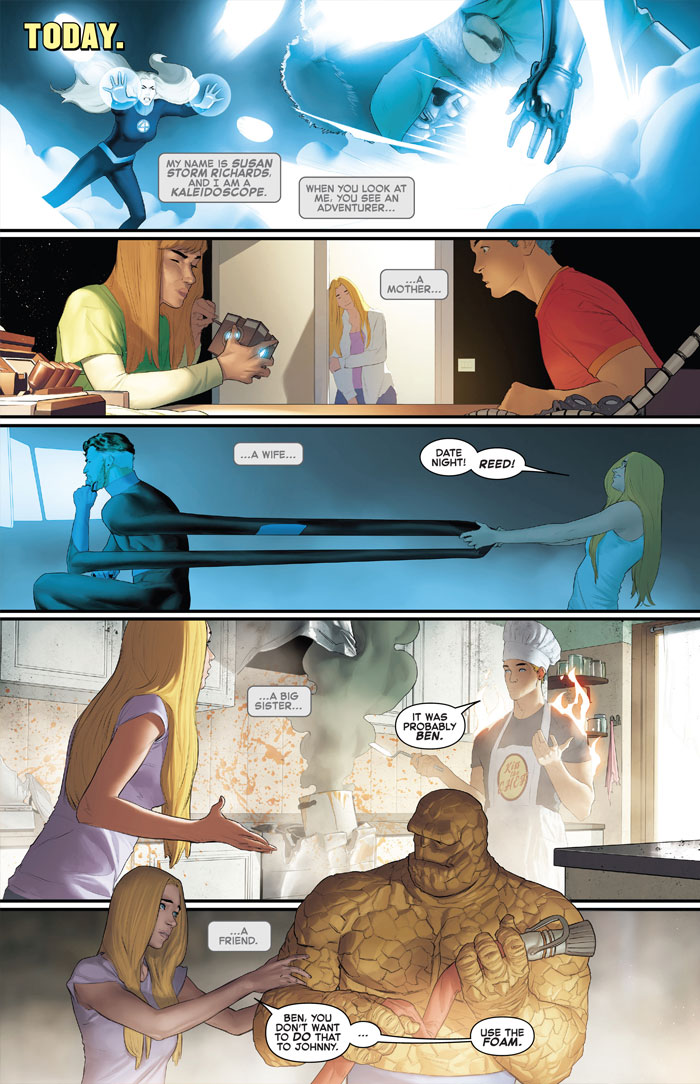 Sue Storm was continuously put in the role of the wife, the mother, the teacher, the nanny but rarely in the role of the hero. This can be written off as a consequence of the times – in the 60s she is just a girl after all – all the way up to the 90s where she was made a sex kitten with hot pants and a boob window. This is unfortunate because Sue could be a nuanced and complicated character and the few times when a writer actually put some effort into developing her Sue Storm shines. And she has one of the strongest power sets of anyone in the Marvel universe. Certainly more useful and practical than any of her teammates – I mean The Thing isn’t going on any stealth missions and “burn it with fire” is not always an option, and as for Reed…well his usefulness can be a stretch at times (I’ll be here all week).

But Sue? Look, being invisible is a cool and can come in handy, and the ability to make others invisible is a bonus as well, but her real “fantastic” power is the ability to create force fields. There are defensive and can act as a protective shield for herself and others (even cities from time to time) and offensive being used as projectiles, bludgeons, and can be inverted to crush objects and opponents (even a Celestial shell once).  Basically Sue Storm is a badass.

So I greeted the news that she would get her own – and first – solo series with great excitement. And the fact that it would be written by Mark Waid was also good news as far as I was concerned. Waid’s output can be inconsistent at times I admit, but there is no denying that he is a great comic book writer and his history with the Fantastic Four was a pretty darn good run. And when Mattia De Iulis was announced as artist I saw this as a good sign as well. All things considered this was shaping up to be something special.

So after all that preamble is this actually something special?

The issue begins in flashback where Sue is on a covert mission for S.H.I.E.L.D. attempting to extract a scientist from a vaguely soviet-style country. This would be an easy thing to do when you can become invisible but an unexpected snow storm throws the mission a curve as the invisible team members become outlined by the falling snow. Sue and her partner Aidan Tinreach work together to complete the mission and Sue reveals her “day job” as a member of the Fantastic Four.

In the present Sue is reflecting on her role as wife, sister, and friend while looking over her past accomplishments and at the same time contemplating how she wants to move forward. It is then she is contacted by the CIA in regard to a kidnapping in Moravia where six people have been taken hostage including Aidan Tinreach who has sent a coded message apparently to Sue. The CIA asks her if she knows anything and to not get involved as to not start an international incident. Sue decides to get involved.

After a bit of banter with Nick Fury, Sue heads off on her own to Madripoor – the most dangerous city on Earth – where she immediately is attacked by ski-mask wearing, machete wielding bandits. One of which she handily takes down while the other is incapacitated by…Black Widow! Dunn, dunn, duuunnnnn.

As I said in the opening this is mostly set-up. Establishing the situation and backstory and putting Sue in position for an espionage type story.  And all this is done in a serviceable, workmanlike way and it lays the groundwork for the rest of the story. In that sense it is a typical first issue.

But Waid does a few things here that I particularly like. First is the establishment that Sue was sidelining as a S.H.I.E.L.D. agent. Invisibility is a perfect match for covert ops and it surprises me that this hasn’t been utilized before. (To my knowledge there was one cameo that Sue made in a S.H.I.E.L.D. book with Coulson but nothing else as far as I’m aware). And the bit with the falling snow exposing the silhouettes is clever and adds some tense drama as well as a few comedy bits. 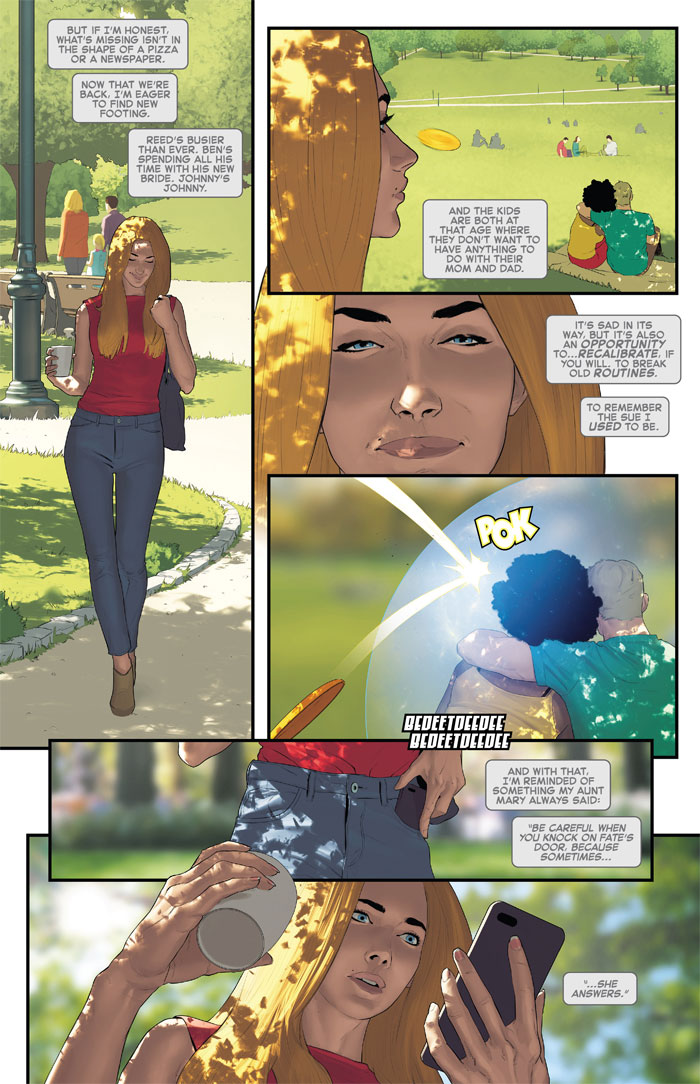 Waid also acknowledges the way Sue has been handled in the past – being portrayed as only the wife, sister, nanny, etc. – while at the same time establishing that she has done a hell of a lot as a hero and is powerful in her own right. There is one instance I particularly liked where she is walking through the park and spies a couple kissing on the grass unaware that a Frisbee is headed in their direction. Sue silently puts a force field up around them and the Frisbee harmlessly bounces off without the couple ever knowing what just happened. This is a small thing, nothing life threatening or apocalyptic, just a small moment that proves Sue is there to help and protect. She will save people from any danger be it a cosmic invasion or a minor bump on the noggin. It is a nice way to show the Sue is a hero all the time, it’s in her nature.

There is a borderline cliché moment when Sue is confronted by the CIA director that could have devolved into a sexist insult rant but thankfully Waid pulls away from that and simply has Sue hold her own and eventually get one over on him.

All of this is held together nicely by Mattia De Iulis’ art that while not as stylistic as his Jessica Jones work is still hazy and atmospheric and adds a kind of nostalgic filter on what could be grim/gritty material. I especially like his take on Sue’s uniforms contrasting the baby blue 60s-style uniform from the flashback that looks baggy and ill-fitting compared to the sleek body suit in the present.

All in all this is a good first issue. I enjoyed it. That’s all that really needs to be said really (he says after 1,200 or so words) but, as with all first issues, I am cautiously optimistic. This is a five issue series and it seems to be on the right track. My intent is to return to write a follow-up to this after all the series has completed and see if the whole has lived up to the promise of the premise.

Till then I’m just happy to see a representation of Sue Storm – The Invisible Woman – as she should have been all along: a powerful badass.